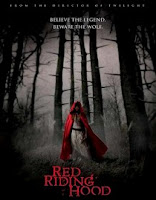 ) has been in love with Peter since childhood. So she is surprised when her parents (Billy Burke and Virginia Madsen) arrange her marriage to Henry. However, the day that they find out about the engagement, a family tragedy occurs when the wolf, that inhabits the nearby forest, takes Valerie’s sister’s life. To avenge her killing, the village’s men decide to hunt the wolf and kill him, but the wolf takes another life, this time of Henry’s father.

) is the villagers’ only hope. When he arrives things get more complicated for he reveals they’re dealing with a werewolf, who likely lives among them. Suspicion makes everyone uneasy, and soon enough, during a blood moon, the monster appears again to claim more lives.

There are great costumes in this movie; Valerie’s red cape looks stunning against the wintery landscape. The only resemblance this film has to the folk tale is when Valerie has a nightmare about her grandmother (Julie Christie, Away from Her