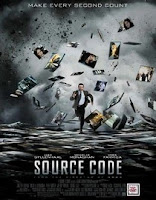 ) has been given 8 minutes to access, with another man’s identity, a passenger train in Chicago, which is about to explode. In that lapse of time Stevens is expected to pinpoint the perpetrator and find the bomb. The finding of the author will allow authorities to stop other terrorist attacks from happening in downtown Chicago that same morning. With each recurring session without the desired results, Captain Stevens has more questions such as why he sees another man’s face when he looks into the mirror.

Captain Goodwin (Vera Farmiga, Up in the Air

) is in charge of the sessions, and has to deal with the pressure of explaining why Captain Stevens only has 8 minutes every time he returns to the train scene. Michelle Monaghan (Gone Baby Gone

) co-stars as Christina, a woman Stevens meets in the train and is fixed on saving.

This movie is as dynamic as the fast speed train it is based on. The spectator has the same questions that Captain Stevens does and one finds out the answers as the film progresses. It seems one might be able to anticipate what happens next, but the movie throws quite a few curveballs.