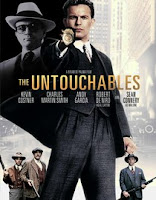 US Treasury agent Eliot Ness (Kevin Costner, Dances with Wolves) moves to Chicago with his family in a mission to finish Al Capone’s reign of terror. With that purpose he enlists three more men, two of whom are stranger to the Chicago police department. The four of them trust no one and are dubbed “the untouchables”. But to end Capone’s reign, they must bend the rules, kill to avoid being killed, and ultimately bring Capone to justice on a famed technicality.

There are solid and magnificent performances in this motion picture. Kevin Costner is Eliot Ness. Andy Garcia stars as Stone, an aspiring police officer with a great shooting practice record. Sean Connery, in an Oscar-winning role, stars as Jimmy Malone, a tough policeman who knows a thing or two about a corrupt police force and what it takes to bring Capone to justice. Patricia Clarkson stars as Mrs. Ness, a small role, but much needed to provide balance in an otherwise gritty movie. Last, but not least, Robert De Niro stars as Al Capone, displaying all the sheer brutality the man himself was capable of.