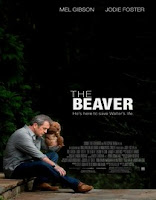 Walter Black (Mel Gibson, Braveheart) has been depressed for several years, so much so that his depression has altered the family dynamics. Thus, his wife (Jodie Foster, The Brave One) opts for asking him to move out of their house. On the brink of suicide, Walter finds a beaver puppet in a dumpster.

Talking to the beaver and making the beaver talk in lieu of himself seems to improve Walter’s condition, and bring his toy company back from near bankruptcy. But soon the beaver takes over Walter’s life and he is again unable to function properly without it. Thus, Walter faces the difficult dilemma of saving himself or being forever a hostage of the beaver.

This movie is a searing, poignant drama, devastatingly real yet uplifting in the end. Mel Gibson delivers a performance that is among his best ever. This seems to be the story of Gibson’s demons—rather than Walter’s—and maybe they are. Jodie Foster directs, very ably, as well as stars in. There is also great acting in the performances of Anton Yelchin as Porter, Walter’s oldest son, and Jennifer Lawrence’s (Winter’s Bone) as Porter love interest, a bright student reeling with pain from a family tragedy.
2011 movies Anton Yelchin award winning dramas Jennifer Lawrence Jodie Foster Mel Gibson movies reviews