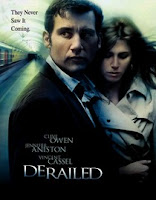 When Charles Schine (Clive Owen, Closer) misses his train one morning and is forced to take the next one, he can’t believe his luck when Lucinda Jones (Jennifer Aniston, The Switch), a striking woman riding in the same train car, comes to his rescue by paying his fare. Every morning since, they meet in the train on their way to work until they go out for drinks and end up deciding to have a casual affair. They go to a motel room only to be attacked by a thug (Vincent Cassel, Black Swan), and that’s when the nightmare starts for both of them.

This is a very gritty psychological thriller with solid direction and even better screenplay. Jennifer Aniston impresses as the striking woman torn with guilt and regret. She manages to stay likeable despite the turns in the film. It is, in my opinion, her most accomplished role to date, too bad she seems to prefer mediocre comedies that have given her relative success yet not provided acting challenges. Clive Owen remains credible all along playing the good, the bad, and “the almost ugly”. Vincent Cassel is amazing as the baddie who turns on the heat when least expected.

The first time I watched this movie I rated it five stars. This time around I didn’t have such emotional reaction, but I still think this film is just something else. Great movie, gives me the creeps every time!
Clive Owen Jennifer Aniston movies reviews psychological thrillers Vicent Cassel