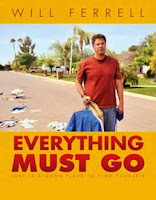 Nick (Will Ferrell, Stranger than Fiction) loses his job as a marketing executive the same day his wife decides to abandon him and throw all his belongings to the front yard. She doesn’t want him to contact her in any way; she just wants out of their marriage. During the next three days—time bought by a policeman friend so he could have a estate sale—Nick befriends a new neighbor (Rebecca Hall, The Town), teaches a thing or two about baseball and business to Kenny (Christopher Jordan Wallace), a kid neighbor, and must learn himself to let go of his possessions and face his demons head on.

I did like this movie. The action occurs almost entirely in the yard; despite of it, it feels surprisingly and refreshingly intimate. Will Ferrell excels as a dramatic actor—better this time than in many of his comedic roles—and so does Christopher Jordan Wallace, as the kid who steals the show with his direct approach to business and friendship. A slimmer Michael Peña plays the role of friend/villain, as if it were needed given everything that is going on; regardless, his role provides the much needed wake-up call for Nick.