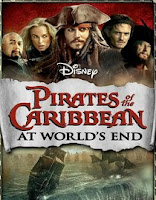 Captain Jack Sparrow (Johnny Depp, Alice in Wonderland) has been claimed by the sea. Now his body and soul belong to Davy Jones. What should his friends do? Travel to the end of the world to bring him back, of course! Will Turner (Orlando Bloom, The Lord of the Rings Trilogy), Elizabeth Swann (Keira Knightley, Never Let me Go) and the crew of the Black Pearl, led by Captain Barbossa (Geoffrey Rush, The King’s Speech) who has been brought from the dead by Tia Dalma (Naomi Harris), sail to Singapore to meet one of the nine pirate Lords.

Through many machinations, not at all clear, Seao Yen (Yun-Fat Chow, Crouching Tiger, Hidden Dragon), the most infamous pirate in Singapore, agrees to help them by giving them a ship, more men and a chart for those unknown corners of the Earth. When the life of Jack Sparrow has been saved, they all must contend against Davy Jones (Bill Nighy) and his crew of undead, their constant inner betrayals, the royal armada, and the fury of a scorned goddess.

The spirit of the first movie is lost at last; there is no fun, just monsters, deceptions and explosions. The characters switch sides so often that is hard to keep track of whose side they’re on or what they’re fighting for. The ending is somewhat bittersweet but satisfying.
action and adventures movies Bill Nighy Geoffrey Rush Johnny Depp Keira Knightley movies reviews Orlando Bloom Pirates of the Caribbean Yun-Fat Chow