Pirates of the Caribbean: On Stranger Tides (♦♦♦) 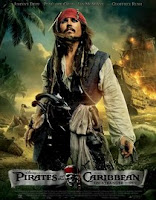 King George gives Captain Barbossa (Geoffrey Rush, Quills) a navy ship to search for the fountain of youth, a quest that is rumored to be an interest of the Spanish monarchy as well. When Jack tries to set free Gibbs, his lifelong friend, he ends up pursued by English soldiers; thus causing havoc in the street of London. There are rumors in London that Captain Jack Sparrow (Johnny Depp, Sweeney Todd) is looking for a crew and a ship for his next adventure; it seems to Jack that someone is posing as him. Jack discovers that Angelica (Penelope Cruz, Vicky Cristina Barcelona), a former flame of his, is the impostor; Angelica brings Jack aboard Blackbeard’s (Ian McShane, We are Marshall) ship, which is headed for the fountain of youth. Sultry mermaids with long canine teeth, mutiny and the largest navies of the age are some of the things these pirates will face along the voyage.

Convoluted plot and excessive sword fighting make this movie seem longer than it is. Penelope Cruz turns on the charm once more, and her lines are almost the only fun in the entire movie. There is a good chemistry between Cruz and Johnny Depp; they had previously worked together in Blow. I want to emphasize that this franchise is in its deathbed. The fun is gone; even Johnny Depp is surely tired of playing the same character so often.
2011 movies Geoffrey Rush Ian McShane Johnny Depp movies reviews Penelope Cruz Pirates of the Caribbean