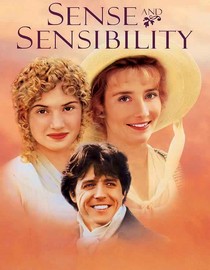 The Dashwood women--three daughters and their mother--are left penniless when their father dies and their estate is inherited by John, their half brother. John and Fanny, his wife, immediately move to Norland, prompting the Dashwood family to send inquiries for a house with low rent to move out immediately.

Elinor Dashwood (Emma Thompson, The Remains of the Day), the oldest Dashwood sister, is all about propriety, decorum and reason. She falls in love with Edward Ferrars (Hugh Grant, About a Boy), her sister-in-law’s eldest brother, but when Fanny discovers the growing mutual attraction between Edward and Elinor, she does everything in her power to voice her disapproval.

This marvelous adaptation of Jane Austen’s novel was ably directed by Ang Lee (Crouching Tiger, Hidden Dragon). The screenplay, which won an Oscar, was superbly written by Emma Thompson. What’s not to like about this film? The astonishing cinematography shows the splendor of the English countryside, the story is romantic, the music is endearing and the acting is superb by the whole cast. No doubt in my opinion this is Kate Winslet’s most accomplished role; not only she steals the show, she should have won an Oscar that year for that performance!