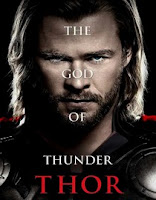 The realm of Asgard has an uneasy peace with the neighboring realm of Bifrost, but when some of its inhabitants intrude in Asgard palace’s weapons hall, impetuous Thor (Chris Hemsworth) interprets it as an act of war. Odin (Anthony Hopkins), king of Asgard, drives away Thor from his realm to suffer penance for his rash actions and learn humility among humans.

This is the first movie I watch in 3D, and it took me about half the movie to get used to the eyeglasses; I’m not sure if that was the reason why the screen sometimes looked blurry and the battle scenes were hard to follow.

Anthony Hopkins was great as Odin. Rene Russo was miscast and didn’t get enough screen time. Chris Hemsworth and Natalie Portman had good chemistry together.

If you enjoy the movies where everything gets smashed and everyone fights for a “powerful” reason, then this is a movie you shouldn’t miss.
2011 movies Chris Hemsworth movies reviews Natalie Portman Rene Russo sci-fi action movies Stellan Skarsgård superheroes movies