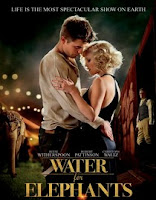 Jacob Jankowski (Robert Pattinson, The Twilight Saga) is about to take his final exam to graduate as a vet, when he’s notified of his parents’ death in a car accident. With no possessions in the world, he jumps on a passing train, which is home to the Benzini Brothers Circus. August (Christoph Waltz, Inglorious Basterds)—manager and master of ceremonies— names Jacob the circus’ vet. August is a cruel man with people and animals alike, so when he discovers the ever growing attraction between Jacob and Marlena (Reese Witherspoon, Walk the Line), the circus main act and August’s wife, August sets on everything and everyone they hold dear.

The scenes when the circus is in session are rather magical. There’s no chemistry between Reese Witherspoon and Robert Pattinson, but I would have been very surprised if they had had any. The most worthwhile moments in this film are ironically provided by Rosie the elephant and Christoph Waltz, who has shown a gift for playing cruel characters to a T. The movie followed the book, but it was short on emotions. My favorite part of the film is when the disaster happens; that’s when this motion picture packed all the punches that could fit into those sequences and it worked well.

I liked the book better, but you’ll like the movie if you’re not too picky.
2011 movies Christoph Waltz movies reviews Reese Witherspoon Robert Pattinson romantic movies