The Assassination of Jesse James by the Coward Robert Ford (♦♦♦) 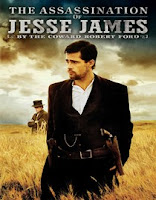 Jesse James’ (Brad Pitt, The Curious Case of Benjamin Button) fame is legendary. His assaults on trains are as well known as his killings. He gets ready for a last adventure in the company of his older brother Frank (Sam Shepard, Fair Game) and a few men recruited on the road. The last addition to the men is nineteen year-old Bob Ford (Casey Affleck, Gone Baby Gone), who has a fascination with Jesse bordering on creepy.

Jesse has a sixth sense that helps him to avoid capture time and again, but after this last train robbery he begins to suspect his good luck is running out. Several events precipitate his end: some of the men involved in the robbery are plotting to turn him to the authorities in exchange for a handsome reward. Furthermore, Bob Ford kills Jesse’s cousin (Jeremy Renner, The Town) and Jesse suspects that the Ford brothers are guilty of it since his cousin went to visit them to settle a score and has since disappeared. When Jesse enlists the help of Charley (Sam Rockwell, Conviction) and Bob Ford for a job, they think that Jesse may not have their best interests at heart, and they are right.

This movie is long, and the pace is so slow that seems even longer. Luckily, good cinematography saves the day. Brad Pitt’s performance as Jesse James is good but not great, and certainly not too different than many of his other performances. I did like Casey Affleck better in Gone Baby Gone, but in this film he is seriously creepy: his obsession with and his imitations of Jesse James seem all genuine, too bad the title gives it away.
Brad Pitt Casey Affleck Jeremy Renner movies reviews Sam Rockwell Sam Shepard