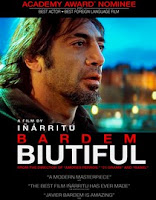 Struggling to make ends meet, Uxbal (Javier Bardem, Vicky Cristina Barcelona)--father of two children--has a side business involving illegal aliens from Senegal and China. Both sides of his business suffer due on one hand to police raids and on the other hand to an unexpected tragedy. At the same time, Uxbal is dying from cancer, which forces him to face his own mortality. His employees’ tragedy also obliges him to face his own demons and those of the people closest to him, finding help to care for his children in an unlikely ally.

This film is directed by Alejandro González Iñárritu, the director of 21 Grams and Babel. Unlike his previous works--where stories are told in non-linear fashion, characters colliding unexpectedly in the end—in this movie the story in linear, at times overwhelming by the slow pace and other times hallucinating as in the scenes in the disco bar. In my opinion, this is Javier Bardem’s best work to date; his performance is subdued, resigned yet forceful as that of a man refusing to die.
2010 movies Alejandro González Iñárritu foreign movies Javier Bardem movies reviews Spanish movies