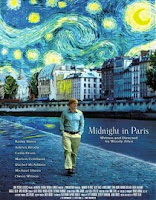 Gil (Owen Wilson) is a successful writer of screenplays in Hollywood, vacationing in Paris with Ines (Rachel McAdams), his fiancée, and his in-laws. Gil is writing a novel, but is stuck in its development. That is, until one enchanting night while roaming unknown alleys, at the stroke of midnight he is invited by a party of strangers to hop into their car, thus opening a gateway to 1920s Paris. Henceforth, every night Gil meets the likes of Zelda and F. Scott Fitzgerald, Hemingway, Dali, Picasso and other illustrious characters of yesteryear.

This little movie is delightful, delicate and funny. Paris may be enchanting, but under the steady writing and direction of Woody Allen, Paris is simply magical. The music is lovely and transporting. The shots of Paris are breathtaking whether by day or night. Suddenly daydreaming doesn’t seem so bad…

I was particularly taken with the performance of Owen Wilson; it is refreshing and funny in a movie made for educated adults. In this film he has successfully come out of Ben Stiller’s shadow, acting besides heavyweights such as Marion Cotillard, Kathy Bates, Michael Sheen and Adrien Brody. Carla Bruni, France’s first lady, also co-stars.