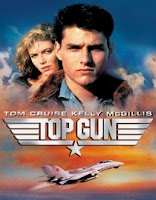 Navy Lieutenant Pete Mitchell, a.k.a. Maverick (Tom Cruise, Knight and Day), is selected alongside his R.I.O. to be a part of the Top Gun program, an elite group of navy pilots. Maverick is among the gutsiest pilots in the navy, but he has a reputation for disobeying direct orders and disregarding the rules of engagement, which make him both unpredictable and dangerous; sometimes that’s what it takes to get the job done. The story is about Maverick’s friendship with Goose (Anthony Edwards), his R.I.O., and his rivalry with Iceman (Val Kilmer, Batman Forever), considered the best pilot in Top Gun.

This movie is good on several levels. It works well as a love story, and as well as an action film and male bonding flick. The love scenes are very sexy and tasteful, unlike most films nowadays where the sex is as graphic as it gets. There is great chemistry between Tom Cruise and Kelly McGillis. The scenes in mid fly are out of this world. I didn’t feel my adrenaline rushing, but I liked them nonetheless. The shots at sunset over the Indian Ocean are simply breathtaking.

Tom Cruise is charming and suave, those were times when he was both perceived as handsome and was well liked. It’s a pity his popularity has decreased over the years; though his acting hasn’t suffered. It’s also too bad that he has chosen more action roles rather than the dramatic ones where he excels.
action and adventures movies Kelly McGillis Meg Ryan military movies movies reviews Tom Cruise Tom Skerrit Val Kilmer