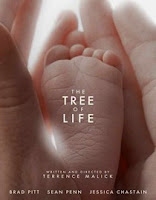 A couple (Brad Pitt and Jessica Chastain) with three children begins to question God and the meaning of life after a family tragedy sends them reeling. The movie is divided into two parts, however invisibly. The first part of the film is about the tragedy and the questioning of life’s purpose. The second part is about the family dynamics when the kids were growing up, from a carefree mother to an overbearing father. The questioning reappears again in the end as one of the children, now an adult, examines his existence.

This movie seems extremely long despite running for 138 minutes. It is short on dialogs. The first part is a visual feast of nature’s most spectacular events on Earth and in space, resembling documentaries from the Discovery Channel. The second part of the movie seems incoherent, in relation to the first, providing hardly any answers to the questions posed. The oldest child obviously feels closer to her mother, sometimes wishing his father dead, but his resentment appears to predate his father’s violent outbursts.