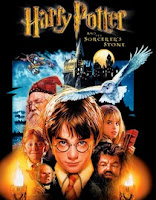 In the first installment of the Harry Potter series, Hagrid (Robbie Coltrane), Professor McGonagall (Maggie Smith) and Albus Dumbledore (Richard Harris) drop off baby Harry on the Durnleys’ doorstep--uncle Vernon and aunt Petunia (Fiona Shaw). Harry (Daniel Radcliffe) grows up not knowing anything about his past until it’s near his eleventh birthday, when he receives a letter addressed to him, which his uncle forbids him to read.

At the stroke of midnight on Harry’s eleventh birthday, Hagrid makes an unannounced appearance to wish him a happy birthday and to surprise him with news that he has been accepted at Hogwarts School of Witchcraft and Wizardry where he will undertake training to become a wizard, as his parents were before him. So starts a path of self discovery in which Harry will learn the truth about his birth parents’ lives at Hogwarts and about their untimely and gruesome deaths on the hands of the darkest wizard of all: Lord Voldemort. Along the way, Harry will become best friends with Hermione Granger (Emma Watson) and Ronald Weasley (Rupert Grint), and all three will have to sort obstacles and face deadly creatures to protect each other and the things they hold dear.

Cool special effects like talking ghosts, floating candles, moving pictures and all the fantastic creatures of the magical realm (i.e. goblins, a three-headed dog, a unicorn, a centaur and a troll) make this movie an instant hit. I found this film very long, though it’s a necessity to introduce all the characters and story arcs that will reappear throughout the series. Especially noteworthy is the cast of veteran actors in supporting roles that reinforce the powerful plot.

The character of Harry Potter is the archetypal hero: orphan, destined to greatness in spite of himself or his choices, marked by loss yet true to his cause. Unlike most heroes, Harry’s strength is not physical but intellectual; it is a result of training and study, though his magical abilities seem to be embedded in his DNA. His destiny has been imposed on him since his mother gave her life to save him, thus disarming Voldemort and condemning him to search for sources to achieve immortality.

Harry Potter and the Chamber of Secrets (♦♦♦♦) 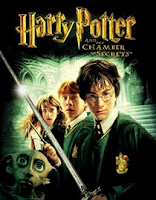 In the second installment of the Harry Potter series, Harry (Daniel Radcliffe) is back at his relatives’ house for the summer. He hasn’t received a letter from his friends at Hogwarts, but a visit from Dobby, a house-elf property of another wizard’s family puts Harry on alert about dangers he may face once he returns to school.

On the second year at Hogwarts strange things start to happen: first, Mrs. Norris--Mr. Filch’s (David Bradley) cat--is found petrified next to a message written in blood announcing the return of the “Heir of Slytherin” and the opening of the Chamber of Secrets; then “mudbloods” begin to turn up, also petrified, coinciding with Harry’s presence. Legend tells that three of Hogwarts founders (Griffindor, Huffelpuf and Ravenclaw) coexisted harmoniously, while the fourth founder (Slytherin) advocated for admitting only “pure bloods” at Hogwarts. Slytherin built a secret chamber at Hogwarts which he called the Chamber of Secrets and announced that only his heir could open it and unleash a terrifying monster that lived in it. Fifty years before Harry’s time, the Chamber was opened and a girl died. It is expected to happen again…

Harry finds a diary that belongs to a former Hogwarts student named Tom Marvolo Riddle. By means of the diary Riddle leads Harry to believe that a creature named Aragog is behind the attacks. No one is certain of what or who is the culprit, but when Ginny Weasley (Bonnie Wright) is lured to the Chamber of Secrets and expected to be killed, is up to Harry to face one of the most dangerous and fiercest creatures the world has ever known.

This is, together with the next movie in the series, my favorite film in the Harry Potter saga. The special effects still amaze, and the cinematography is breathtaking. This time around, Emma Watson, Rupert Grint and Daniel Radcliffe are more confident in their roles; some of Britain’s heavyweight actors turn up the heat and make the movie worth your while, among them are Robbie Coltrane as Hagrid (Hogwarts gamekeeper), the late Richard Harris (his last Harry Potter movie) as Albus Dumbledore—Hogwarts headmaster--, Alan Rickman as Severus Snape (Professor of Potions and Head of Slytherin House), Maggie Smith as Professor McGonagall (Head of Griffindor House), Kenneth Branagh in a guest starring role as Gilderoy Lockhart (Defense Against the Dark Arts teacher), Julie Walters as Madam Weasley, John Cleese as Nearly Headless Nick or Sir Nicholas and Robert Hardy as Cornelius the Minister of Magic.
Alan Rickman Harry Potter series Maggie Smith movies reviews Richard Harris Robbie Coltrane