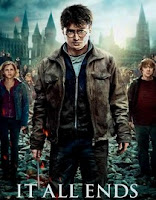 Harry Potter (Daniel Radcliffe), Ron Weasley (Rupert Grint) and Hermione Granger (Emma Watson) have been gradually finding and destroying the seven horcruxes where Voldemort (Ralph Fiennes) has hidden part of his soul. It appears that the last horcrux is Nagini—the snake that Voldemort always keeps by his side—or is it? According to Severus Snape’s (Alan Rickman) last memory, Harry kept a part of Voldemort the night the latter killed Harry’s parents. It seems that Harry will be a sacrificial lamb in the battle between good and evil. When Voldemort summons Harry to the dark forest for a final confrontation, Harry survives a killing curse, thus having the chance to defend his friends and professors at Hogwarts and to defeat Voldemort forever.

This last installment is as dark as it gets. There is violence, destruction, battle scenes; when there isn’t someone dying, someone is getting ready for it. This fine film is certainly surprising, enlightening and brings the franchise to a well rounded ending. Long live Harry Potter!
Daniel Radcliffe Emma Watson movies reviews Sci-Fi Fantasy movies