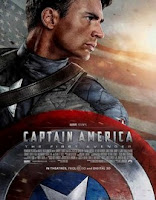 It is 1942. Europe is amidst WWII. Nazi Germany is in need of defeating the allied troops and for that purpose they engage in research for advanced weapons and related stuff. As part of the Hydra program, a German scientist (Stanley Tucci) develops a serum capable of altering body cells to create super soldiers. Before it is ready, Hydra chief Johann Schmidt (Hugo Weaving), a power-hungry man, injects himself the serum and becomes sort of a mutant (this movie’s villain). The German scientist defects to the U.S. where he has the chance to perfect his invention and recruits Steve Rogers (Chris Evans), a scrawny, young man intent on entering the army. When Rogers is injected the serums, he becomes a super version of himself; however he is warned that his best qualities will be magnified as well as his worst.

The army doesn’t take him seriously, but a U.S. Senator gives him the opportunity to help the troops by raising money for the cause. Wearing a colorful costume, Rogers becomes Captain America. During a tour abroad to entertain the troops, Rogers learns than there’s an American battalion that has been taken captive by Schmidt, and he decides—with the prodding of Agent Carter, his love interest--to put his newly gained skills to good use.

Agent Peggy Carter (Hayley Atwell, The Pillars of the Earth) is so poised that she even wears red lipstick to battle. Schmidt is assisted by soldiers with the look and the energy of Darth Vader. The plane in which Schmidt makes his escape looks like a B2 bomber (pretty advanced stuff for 1943!)

Rogers is hotter than hell, and his screen presence resembles that of another superhero (Christopher Reeve as Superman).This movie is a lot of fun, with subtle jokes and plenty of war action to please the audience. What I liked the most was the historical background given to the story, which makes it kind of plausible.
action and adventures movies Captain America Chris Evans Dominic Cooper Hayley Atwell Hugo Weaving movies reviews Stanley Tucci superheroes movies Tommy Lee Jones