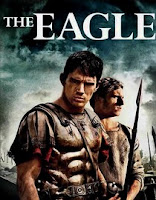 In 120 A.D., 5000 Roman legionaires ventured to the North Britain territories and vanished forever, with them disappeared the golden Eagle—symbol of Roman honor. To avoid further loss of men, Emperor Hadrian ordered the construction of a wall in the frontier with North Britain.

No one ventured beyond the wall in twenty years, until Marcus Aquila (Channing Tatum)--the son of the centurion in charge of the Ninth Legion—accompanied by Esca (Jamie Bell), his Briton slave, decided to restore his family good name by bringing back the statue. It helped that Esca spoke Gaelic; a former centurion living in the forest conveyed rumors of the Seal tribe having the Eagle. To retrieve the statue they would have to deceive the tribe, and so they did, but how to escape with no one helping?

For close to two hours one watched as Aquila and Esca ventured into the unknown, but the threats turned out to be more imagined than real. Were most of the legionaires dead? That question surfaced often and the answer wasn’t to my satisfaction. The ending seemed somewhat silly after so much hype. Good acting, Gothic-esque mystery and good fighting scenes make the film worth your time.