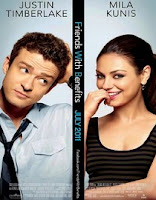 Jamie (Mila Kunis, Black Swan) is a successful headhunter. Dylan Harper (Justin Timberlake, The Social Network) owns an influential blog and is in conversations to head a well known publication. The problem is that Dylan lives in L.A. and would have to move to N.Y. City. Jamie convinces Dylan to take the new job with the condition that he can’t leave it for a year. Since Jamie and Dylan are both single and they haven’t been successful in any prior relationships, they decide to throw caution to the wind and be friends with benefits…Friends who have sex that is. Of course, that works well until they realize they are mutually the people they care about the most apart from family.

A lot of nudity and sex, but this movie manages to be really funny without sounding offensive. There’s solid acting by all characters, and the topic of Alzheimer’s is treated with care. There is great chemistry between Mila Kunis and Justin Timberlake. I thought that this is a better story and the acting is better than the less successful No Strings Attached (Natalie Portman and Ashton Kutcher), which broaches the same topic.
2011 movies Justin Timberlake Mila Kunis movies reviews romantic comedies