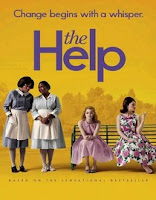 This movie takes place in the segregated South in the 1960s.

Eugenia Phelan, a.k.a. Skeeter (Emma Stone) is given a job as a backup writer for a housekeeping column in a newspaper at Jackson, Mississippi. She asks Aibileen Clark (Viola Davis), a black house maid in the house of white folks, for help. Aibileen accepts to help Skeeter, but the latter soon has another idea: she plans to write a book telling revealing stories of white folks from their maids’ perspectives.

At first Aibileen refuses, but a sermon at church makes her change her mind. Then Minny (Octavia Spencer), a maid who has recently lost her job jumps onboard as well. As the Civil Rights Movement is beginning to take shape and raids on black people increase, more maids collaborate with their own experiences. The publisher asks one more condition before publishing: to include Skeeter’s tale of the maid that brought her up, but finding out what happened between her mother and her maid may be more than Skeeter bargained for.

This movie unfolds at a very slow pace, but the script is funny at times. The cinematography is great, with emphases on Southern landscapes and open roads sided by trees (a real beauty). Last but not least, the film is full of magnificent female performances; it’s hard to pick just one, but Emma Stone holds her court in a movie with acting heavyweights such as Viola Davis and Sissy Spacek.
2011 movies Emma Stone Jessica Chastain movies reviews Octavia Spencer Sissy Spacek Viola Davis