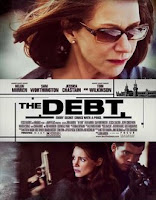 Rachel (Jessica Chastain/Helen Mirren), Stefan (Sam Worthington/Tom Wilkinson) and David are three Mossad agents, who in 1965 were given the mission to kidnap in East Berlin a former Nazi doctor—Dr. D. Vogel, a.k.a. the Surgeon of Birkenau—responsible for thousands of deaths during the war, and transport him safely to Israel to stand trial.

The kidnapping goes as planned, but not so the escape from East Berlin, so Rachel, Stefan and David must take turns to feed and care for Dr. Vogel until their extraction takes place. There are two sure things: it will be hard for the three operatives to interact with their enemy, and they will never be able to forget what’ll happen next.

This movie is among the best I have watched this year! It starts a little bit scattered, going back and forth between the past and present day, but one the story focuses, it’s a pure adrenaline rush. It is wonderfully acted by young and old actors alike, thus there’s a sense of continuity in the time elapsed in the film, instead of a break. The characters are so flawed, so human, and their mission has gone so wrong, that one has no other choice but empathize with them.

I’m starting to enjoy Jessica Chastain’s performances; this year she has gotten great opportunities to shine next to acting heavyweights, this film included. In my opinion, Helen Mirren’s performance is her best since The Queen. I always enjoy Tom Wilkinson’s grave, forceful acting, and in this movie he does not disappoint.