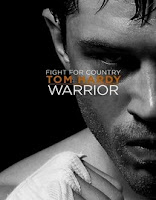 Brendan Conlon (Joel Edgerton) is a teacher of high school physics. During a visit to his local bank, he learns that he is three months away from foreclosure (unless he can come up with the money); his other choice is bankruptcy. To raise money to avoid financial disaster, Brendan starts attending late-night mixed martial arts fights, but he gets suspended from teaching until the following semester. With more time available, Brendan begins training for an upcoming UFC championship to take place in Atlantic City. The purse for the winner is $5 million dollars.

Tommy Conlon (Tom Hardy) is a runaway US Marine with a lot of rancor in him for his natural family. He visits his father (Nick Nolte), a former alcoholic who has been sober for three years, and asks him to become his trainer. Tommy enters the same championship where his estranged brother Brendan is headed to. Their main rival is a bear-man from Russia, merciless as no other, named Koda.

This movie starts very slow, with a sketchy subplot about the history shared by Tommy and his father. The lightning does not help either, since the opening scenes are so dark that almost made me reconsider watching. That flaw is soon corrected, though not the sketchy storyline which remains so almost to the very end.

There aren’t great acting performances in the film, but the action works, due in part to split screens that add dynamism to the film—such as the training sessions for the championship. The unspoken rivalry between Brendan and Tommy enhances the action as well. Fighting scenes where the punches and falls explode in your ears more than make up for the lack of good acting. Also, the crescendo musical score adds to the energetic pace as well.

The ending is predictable, but regardless of whom you cheer on, you’ll enjoy great sportsmanship. After all, it turns out to be a good movie if you’re willing to overlook the flaws and give time for the story to develop. You will not be disappointed!
2011 movies Joel Edgerton movies reviews Nick Nolte sports movies Tom Hardy