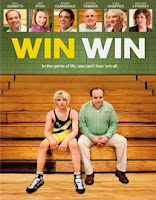 Mike Flaherty (Paul Giamatti) is a lawyer with an independent, dwindling law practice. He coaches a wrestling team of teenagers at night. When Leo Poplar, an elder client with dementia, comes to his practice to make a case against moving out of his house and refusing guardianship from the state of New Jersey, Mike sees Leo as heaven-sent for Leo pays $1500 dollars a month for someone to take care of him.

Mike has tried on several occasions to contact Leo’s daughter in Ohio without success, so when he argues in court for Leo’s guardianship and the judge grants it, Mike puts Leo in an institution and pockets the monthly allowance.

Soon enough, problems come knocking when Kyle, Leo’s sixteen year-old grandson---running away from his addict mother--appears at Leo’s door. Mike brings Kyle to live with him and his family; since it’s obvious that Kyle’s mother doesn’t care for her son, Mike enrolls Kyle in the local high school and the wrestling team, where Kyle shows a special talent.

Kyle adjusts well to Mike’s family and the community, but one day his addict mother finally appears, knowing full well that her father has money, and she threatens to bring Kyle and Leo back to Ohio, where she lives, problem is, they don’t want to.

I really liked this movie. There are some comedic elements, but it is ultimately the drama--of the lawyer taking advantage of the elder man, the elder man wanting to live at home and not having someone responsible enough to make sound decisions for him, the recovering addict daughter who wants her father’s money because she thinks she is entitled to it and the kid who is good at sports but doesn’t like his mother—that wins through the audience.

The acting is stellar and the script is a jewel. The sports also pull you in. You end up rooting for that wrestling team of underdogs. The ultimate lesson of this film is to care about the things that are truly important like family and friends, and this message is delivered without sermons.

A jewel of a movie.
2011 movies movies reviews Paul Giamatti