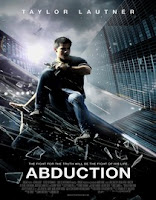 Nathan Harper (Taylor Lautner) is a teenager with anger management issues for which he is seeing a psychiatrist. His father trains him in personal combat in his spare time. Because of a school sociology project, where he is assigned to search web sites listing missing persons, he learns that the people he has known all his life as his birth parents are not.

When Nathan contacts the web master, his address is tracked and his adopted parents are killed. Suddenly, Nathan is on the run and he can trust very few people among them Karen (Lily Collins), his high school crush, and his psychiatrist (Sigourney Weaver), who turns out to be a CIA agent. Why is the CIA tracking Nathan and Karen? But most importantly, why are some people intent on killing Nathan?

There are few scenes meant to show Taylor Lautner’s perfect abdomen, just as in Twilight. He has great chemistry with Lily Collins and a few hot kissing scenes prove it. The action and running are good, mediocre really, but the reason why the baddies and the CIA agents are pursuing him is a rip off from Mission Impossible I. If something good comes out of this movie is Taylor Lautner’s ability to stand in a movie of his own; his acting no doubt surpasses those of his Twilight counterparts.
2011 movies action and adventure movies Lily Collins movies reviews Sigourney Weaver Taylor Lautner