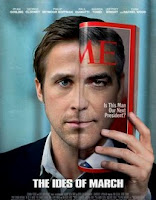 Democrat congressman Mike Morris (George Clooney) is running a campaign to win the presidential primaries in Ohio. Despite his idealism, he is the underdog in the race. Morris has a great support team with Paul Zara (Philip Seymour Hoffman) as his campaign manager and Stephen Meyers (Ryan Gosling) as press secretary.

Stephen is loved by friends and foes alike; he is handsome and charismatic, the camera loves him. What better guy to take off the race? When Morris’ political rival’s campaign manager, Tom Duffy (Paul Giamatti), tempts Stephen to come to work for him, Stephen temporarily considers it setting in motion a chain of events that will change the course of the election.

This is the best movie of the year thus far. It is a strong 4 rating, leaning dangerously towards 5. I really liked this film, not only due to its contemporary resonance, but to the tremendous performances delivered by the entire cast. As you may have inferred by now, I love Ryan Gosling; he is no doubt the most gifted actor of his generation. This movie is a great addition to his already impressive resumé.

George Clooney directs, produces and co-writes the script, but it is his acting that makes this movie worth your while. This is his best performance since Michael Clayton. Marisa Tomei owns her rather minor role as sneaky journalist Ida Horowicz, who befriends politicians to get stories. Seymour Hoffman and Paul Giamatti, great actors in their own right, have personality clashes in their roles as campaign managers. Last, but not least, is Evan Rachel Wood, another gifted young actress, who as Molly Stearns--daughter of Jack Stearns, chief of DNC--almost brings congressman Morris to his knees, or did she?

George Clooney was asked in an interview why he chose young actors for this movie and he replied that because they were cheaper. They may have been cheap but they were great.