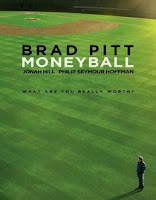 Billy Beane, former baseball player, now General Manager of Oakland’s Athletics, has to deal with budget constraints. Facing the loss of his three star players to other teams, he has to replace them, but can’t pay high salaries that major franchises in the league can afford.

Billy Beane meets Peter Brand, a graduate of economics from Yale, who focuses on statistics rather than personalities. By removing the human factor and focusing purely on players’ performances, Brand is able to predict winning games. Beane forms a team that successfully beats the odds and critics to set the record for consecutive wins in a season, thus changing the rules of the game.

There are magnificent performances in this film, starting with Brad Pitt--whose acting is a tour-de-force—and his wingmen Jonah Hill (welcome to the big leagues!) and Philip Seymour Hoffman. The script is funny at times, but overall provides all the drama and excitement deriving from our favorite past-time. It is an emotional, uplifting movie considering that it was up to a team of overlooked players to change the rules of the game.
baseball movies Brad Pitt Jonah Hill movies reviews Philip Seymour Hoffman sports movies