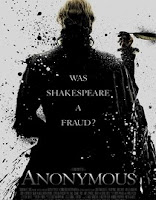 This film puts forth the theory that the literary work of William Shakespeare was penned by nobleman Earl of Oxford and given to a lesser known author for profit in exchange for his discretion regarding the provenance of the manuscripts. Groomed to succeed Elizabeth I as monarch of England, the Earl of Oxford committed two sins as a youth: wrote poetry, which was considered seditious, and he engaged in an illicit affair with the queen despite himself being married to the daughter of Elizabeth’s state counselor. A child was conceived by the lovers, but their romance was doomed due to state affairs.

Despite having a great premise, I found the story rather confusing, at least the political subplot. The theory involving the true origins of Shakespeare is rather tantalizing.