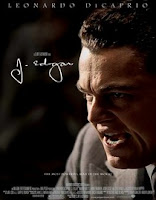 J. Edgar chronicles the beginnings of the FBI from the fight against communist radicals in the 1920s and 1930s until Hoover’s death in the 1970s. From his point of view, Edgar Hoover describes his relationship with his mother, his devotion to his career, his power struggles with politicians of the era, and his lifelong relationship with Clyde Tolson, the second man in the FBI.

A major faux pas in this movie is the rather ghastly makeup applied to the aging characters of Hoover, his secretary and Mr. Tolson. However, if one overlooks that flaw and focuses on the acting, then one is up for a real treat. Leonardo DiCaprio delivers his best performance yet, and Armie Hammer is equally amazing as his lover-friend. Judi Dench and Naomi Watts have minor roles but fundamental in J. Edgar’s life: Hoover’s controlling mother and his loyal secretary.

The much discussed and anticipated kissing scene between DiCaprio and Hammer is rather minor and, in my opinion doesn’t justify the hype. The movie does a great job at portraying the characters in all his human complexities despite of what the audience may or may not think.