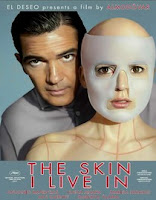 Marked by the tragic deaths of his wife Gal and his daughter Norma, Robert Ledgard, a plastic surgeon, begins to experiment transplanting transgenic skin to Vera, a patient he keeps secluded in his house. The genesis of his experimentation and the patient herself, predate but are very much intertwined with Norma’s death.

In this suspenseful thriller, Spanish director Pedro Almodovar has outdone himself. The movie keeps the themes of sexual preferences and transgender issues—so common in his previous works—to a minimum. In this film, however, the constants are marital betrayal, revenge and the use of scientific inventions for personal gain.

Despite being filmed in interiors almost in its entirety, the movie doesn’t feel claustrophobic, but surprisingly intimate. As audience, we don’t know at all times where the story is going, but we take the plunge just the same with astounding results. The conclusion of the film will resonate with you.

Not to be missed! This movie will be a powerful contender in the foreign films category at next year’s Oscar ceremony.
2011 movies Antonio Banderas Elena Anaya foreign dramas Marisa Paredes movies reviews