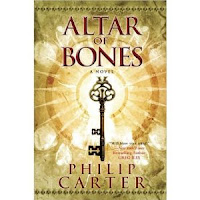 A homeless woman named Rosie is assassinated in the streets of San Francisco. Her attacker has been searching for clues of the existence of something called the “altar of bones”. Before dying, Rosie reveals a mysterious message and the story begins.

Ry O’Malley, Mike’s other son, survives an assassination attempt and infiltrates the Russian mafia in California, in an effort to find the film that can guarantee his life. Ry joins forces with Zoe Dmitroff, a gutsy attorney with blood ties to the stabbed homeless woman, in order to find the film and ultimately the altar of bones and discover its secrets.

I liked this book. It is a non-stop adventure, full of interesting twists and unexpected turns. The story is a rich tapestry with elements of historical fiction--that may not be as fictional as they seem--, thriller novel and Russian folklore. I did like the concoction, though it is far-fetched at times, such as when talking about the fountain of youth. Aside from that, the story is well written and hard to put down.
books reviews Philip Carter