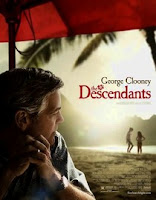 When his wife has a boating accident and falls into an irreversible coma, Matt King (George Clooney) must cope with the loss of his wife and fill the void of the missing parent by taking care of his ten year-old daughter Scotty and seventeen year-old Alexandra. Meanwhile, Matt, as the trustee of his family land, must make the decision of whether or not to sell his ancestors’ estate to the brother-in-law of the man with whom Matt’s wife was having an affair.

The Descendants is a family drama about a few issues: loss of a parent/spouse, marital betrayal, good parenting and ultimately forgiveness. These points are very well stated though the movie is rather slow.

There is something worth mentioning about the plot which is a line delivered by George Clooney at the start of the movie: just because you live in paradise doesn’t mean that life stops happening. That is also a successful point throughout the film. Beautiful Hawaiian seascapes contrast with the seriousness of the situation the King family is facing.

Even though George Clooney’s acting in this film is good, I preferred his role as the political candidate in The Ides of March. In my opinion, that performance was nothing short of brilliant.
2011 movies George Clooney movies reviews