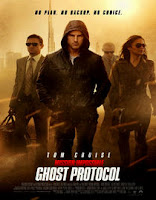 An IMF agent--is killed by a female assassin for hire in Budapest--while carrying classified documents. His killer gets the documents and escapes.

Ethan Hunt (Tom Cruise), after escaping from a Russian prison, is given the mission of stealing nuclear codes from the Kremlin. However, the mission goes terribly wrong and a rogue, Swedish nuclear extremist, gets away with the codes while bombing the Kremlin. Russian’s authorities suspect Americans are behind the attack. Thus, the president disavows all IMF agents and activates Ghost Protocol. Without resources or backup forces, Ethan Hunt and his team have to retrieve the codes.

This is a stylish, grand motion picture with beautiful photography and globetrotting adventure. Tom Cruise has never been in better shape, proof of that is his mind blowing stunt on the outside of the 120th floor of the tower hotel in Dubai. The scene where Jeremy Renner jumps towards a slowing giant fan in a tunnel is reminiscent of Cruise’s famous incursion at Langley in MI-1.

Overall, this movie has sufficient twists and turns to entertain and surprise, even though the plot is slightly convoluted. Jeremy Renner as a tormented agent in disguise and Tom Cruise provide most of the dramatic tension when acting is concerned. Swedish actor Michael Nyquist (Abduction, The Millennium Trilogy), as the villain, is quickly becoming a household name.
2011 movies Jeremy Renner Michael Nyquist Mission Impossible movies reviews Tom Cruise