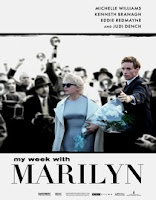 In 1956, during the filming of The Prince and the Showgirl, Marilyn Monroe charmed Colin Clark, a third assistant director in the production. As a consequence, the dynamics of the relationship that ensued are explored, as well as her interaction with her co-star and director Lawrence Olivier and the rest of the cast.

If with Blue Valentine Michelle Williams earned a well deserved Oscar nomination, My Week with Marilyn certainly consecrates her as a screen royalty. Michelle Williams not only physically resembles Marilyn Monroe, but displays her charming screen persona as if possessed by Marilyn herself.

Williams, with the help of an amazing script, successfully manages to portray Marilyn in all her human complexities: as a magnetic actress able to command the cameras at will, but also as a drug addict and insecure belle, who thanks to a neglected childhood needed all the adulation in the world to feel wanted and noticed.

Also noteworthy is the acting of supporting characters key to the story such as Kenneth Branagh as Lawrence Olivier, who successfully conveyed the frustration and awe that a fellow actor must have felt for Marilyn Monroe; Judi Dench, an acting heavyweight always with Oscar worthy performances, Emma Watson, as a costume assistant already stepping out of the Harry Potter’s shadow, and especially good is Eddie Redmayne (The Pillars of the Earth, The Good Shepherd) as Colin Clark, the man who falls in love with Marilyn Monroe and ends up brokenhearted.
2011 movies Eddie Redmayne Emma Watson Judi Dench Kenneth Branagh Marilyn Monroe Michelle Williams movies reviews