Sherlock Holmes: A Game of Shadows (♦♦♦) 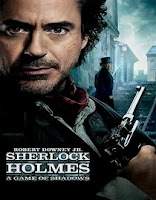 Professor Moriarty, an evil genius and Holmes’ nemesis, has been planting bombs all around Europe to cover up the assassinations of arms industrialists. The idea is to force the fighting of nation against nation to create demand for weapons and Moriarty would then supply them. Sherlock Holmes figures out as much and has the fight of his life against Moriarty, all to save Europe from war.

This second Sherlock Holmes installment is darker than the first, both in humor and plot. Unfortunately, it also feels long and somewhat convoluted. I had a hard time following the story and it has been eons since I read the books, so I had to rely on the movie.

There is good acting by the entire cast and there are humorous moments throughout, but not enough to call it a fun time at the movies.
2011 movies movies reviews