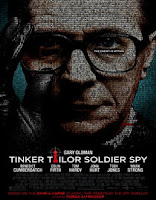 It’s 1973. There have been rumors for several years that a Soviet mole has infiltrated the highest levels of British intelligence. The department in question has only five members, each one with plenty of hidden skeletons in their closets. George Smiley (Gary Oldman), a retired spy, is given the task to find out who the mole is and expose him.

I didn’t know what to think of this film once it was finished. It left me puzzled. I’m not sure I fully understood the intricacies of the plot; I’ll have to watch the movie with closed caption to appreciate it completely.

There were many twists in the plot and as I said each one of the five spymasters had something to hide, so the audience is left in the dark for the entirety of the movie and we learn only what Smiley has up to that point. I went along for the ride, but at some point I began to question if there was going to be enough time in the end to expose the traitor. Ultimately, the result was neither satisfying nor disappointing.
2011 movies Gary Oldman movies reviews spy movies