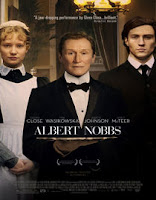 Albert Nobbs (Glenn Close) is a waiter in a small hotel in Dublin. He has two big secrets: one, he is actually a woman. Two, he has a huge stash of money hidden under his bedroom’s floor. When Mr. Paige, a painter, comes to do temporary work at the hotel, he is accommodated in Mr. Nobbs’ bedroom, which only has one bed. During the course of the night, Mr. Paige learns that Albert is a woman. Feeling in danger of being exposed, Albert begins to shower Mr. Paige with attention, until Mr. Paige entrusts Albert with a similar secret of his own.

Meanwhile, Mr. Nobbs is financially close to fulfilling his dream of owning a tobacco shop, but all comes to a screeching halt due to a love triangle he becomes part of with a hotel maiden named Helen (Mia Wasikowska), who is in love with a good-for-nothing young hotel employee named Joe.

Albert Nobbs is without doubt one of the finest movies of this 2012 Award Season. Glenn Close delivers a top notch performance (one of the best of the year, perhaps eclipsed only by Meryl Streep’s in The Iron Lady) with a quite intensity that engraves the soul. Glenn Close looks so utterly androgynous, that it’s hard to accept that she is behind the title’s character. Mia Wasikowska is equally brilliant in a far more passionate role than the ones she has been given up to this point.

This movie is a period piece without pretensions. The photography is fantastic. The director doesn’t resort to cheap emotional tricks to capture the audience’s attention, instead he leaves it to the story, powerful, yet subtle enough to pierce your heart…And it does it quite effectively.
2012 movies Glenn Close Mia Wasikowska movies reviews