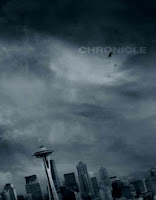 Andrew is a high school kid who has recently bought an expensive video camera with which he documents everything. Out in the woods, Andrew, his cousin Matt and his friend Steve go into an underground cave where they come upon something odd. In the days following the incident in the cave, they discover they have developed telekinesis abilities. At first is all very cool because Andrew becomes a popular kid due to his new found superpower, but Andrew’s father is abusive, triggering rages that make Andrew capable of really awful things.

We as audience enjoy superhero movies so much, but this is the one side that is never explored. People are capable of doing good and bad stuff, but superhero powers magnify personality traits already present, as we are reminded so often in movies like Spiderman and Captain America. Is it a pretty side of power? It’s not, but it’s worth exploring.

This movie is certainly not a classic, but it’s definitely worth watching if only as a cautionary tale.
2012 movies superheroes movies