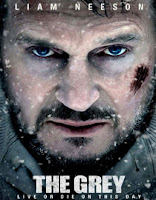 A small plane, transporting personnel employed by the petroleum industry in Alaska’s wilderness, crashes leaving only seven male survivors in its aftermath. The remains of the plane land on a remote, snowy, mountainous terrain that is home to a wolf pack. The men decide to walk across the snow to a nearby forest, but the farther they go into the trees, the less of them that come out alive.

Liam Neeson is very convincing as the man whose only purpose is to defeat the wolf pack and come out alive. Unfortunately, the story is very predictable. The script is good, but it doesn’t offer many challenges as far as acting is concerned. The suspense is kept until the end, but with a bunch of angry wolves stalking their human prey, it’s not hard to anticipate who wins this fight.
2012 movies Liam Neeson movies reviews