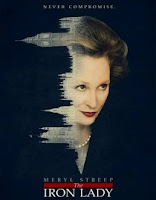 This biopic chronicles the beginnings of Margaret Thatcher, as the proud daughter of a small business owner, as Oxford graduate and her marriage to Dennis Thatcher. Thatcher, as a senile woman, reminisces on her political career, her highs and lows as Britain’s Prime Minister and her clash with her political party that led her to resign from office.

I have read some reviews expressing how this is Not a political movie. I strongly disagree. This movie is very much about Margaret Thatcher the woman as it is about her politics, her rise and fall as a politician and the ideals who shaped her. It is impossible to talk about Margaret Thatcher’s life divorced from politics; doing so is simply deny her impact in her country’s political times.

The Iron Lady chronicles Margaret Thatcher’s clashes with unions, who were demanding high salary increases for unionized workers of up to 35%!, the middle class discontent with her economic changes, her strong stance towards IRA’s terrorism, the war she was forced to fight to recover the Falkland Islands from Argentina’s Junta’s illegal intervention and the collapse of socialism in eastern Europe and the Soviet Union. Through all those convulse events, her leadership shone brighter, Great Britain grew stronger.

Enough with what the movie is about. Meryl Streep’s performance is stirring, the best of her career in my opinion. Streep moves like a breeze from senility and hallucinations to a powerful, sound minded politician contending with friends and foes alike.

This 2012 Award Season has been all about Viola Davis, but in my opinion it belongs to Meryl Streep, unlike other many times. This was the year to consecrate her with the status she rightly deserves as Hollywood royalty, no that she needs it.
2012 movies biopics Margaret Thatcher Meryl Streep movies reviews