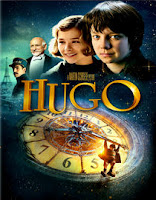 Hugo Cabret (Asa Butterfield) is an orphan who lives in the upper, forgotten apartments of Paris’ train station. Hugo steals food from the station’s shops in his spare time, but his job is keeping the clocks of the station in working order. Hugo collects pieces of broken machinery to fix an automaton that was a present from his deceased father. In his quest to fix the broken machine, he’ll find an ally in Isabelle (Chloe Moretz), the toy maker’s goddaughter. Together Hugo and Isabelle will discover a secret involving Isabelle’s godfather, one that has made him sad for years.

It has been repeated ad nauseum that this movie is an homage to old cinema, to the beginnings of cinema, that is. I must say it is a very beautiful one. It is the reason why we love movies: to live adventures enacted by others and go places that otherwise we couldn’t go, like the moon.

The movie is well directed, as we have come to expect from Martin Scorsese, stepping out of his comfort zone to make a marvelous family film. The movie is well acted also by Ben Kingsley as George Mailes, Sacha Baron Cohen as the villainous Monsieur Inspector, Martin Scorsese in a brief cameo appearance and Emily Mortimer as Mademoiselle Lisette.

Despite the prettiness surrounding the film, I couldn’t help but notice that its message was a little preachy: we must preserve old films for future generations, and that’s a work in which Martin Scorsese has been deeply involved. Yet, the message is not that heavy because the movie is also about fixing things, like broken dreams and helping a forgotten filmmaker to find his place in the world.
2011 movies Asa Butterfield Chloe Moretz family movies Martin Scorsese movies reviews