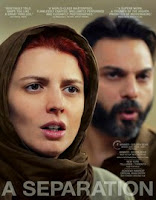 An Iranian woman wants to separate from her husband of 14 years. Her reason is that she wants to leave Iran for good and only has 40 days left in her permit to do so. Her husband doesn’t want to leave Iran because his father, with whom they live, is ill with Alzheimer’s. The husband doesn’t want their 11 year-old daughter to leave with her mother. When the wife leaves home and moves to her mother’s house, her husband employs a pregnant woman to take care of his ill father while he works, but events spiral out of control when the woman loses her baby after an argument with him.

At the heart of this movie are issues of family trust, personal integrity, honesty and eternal damnation. Is a child’s safety worth 15 millions in whichever currency happens to be? And more importantly, is that money worth eternal damnation?

This film won several awards at film festivals around the globe this past award season, though as well acted as it is, the story didn’t resonate with me. I watched In the Land of Blood and Honey written and directed by Angelina Jolie and though I chose not to review it, I thought it was far more accomplished a film than A Separation, which won the Oscar this year in the Best Foreign Film category.

In essence, this film has too much screaming and not enough substance.
2011 movies award-winning movies foreign movies movies reviews