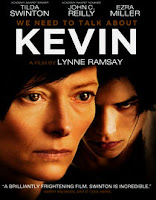 Since Kevin was a child, he was different. He spoke late, even though there wasn’t anything medically wrong with him. He wore diapers until he was five or six years old and he learned to use the toilet after his mother Eva broke his arm when shoving him against the wall. It’s no wonder that Kevin’s relationship with his mother became antagonistic to say the least.

He did bad things on purpose to spite Eva, but everything took an inevitable turn for the worse when Eva became pregnant with a baby girl. Ever since, Kevin did anything possible to grab his parents’ attention, to the point of seriously hurting his little sister. However, the point of no return for Kevin and his family happened when Kevin opened fire against his high school classmates.

The story is told through flashbacks from the past and the present. Emotions are conveyed using close-up camera shots. Dissonant electric guitar notes are played every time Eva has a flashback of the night of the tragedy.

This movie is masterfully acted by Tilda Swinton and Ezra Miller as the poster children of a Double Bind education. If Swinton is great as a tired mother who is horrified by her child’s constant crying and as a depressed woman after the events set in motion by Kevin at school, Jasper Newell and Ezra Miller ably keep pace with her, the first as a trouble child and the latter as a deranged teenager.