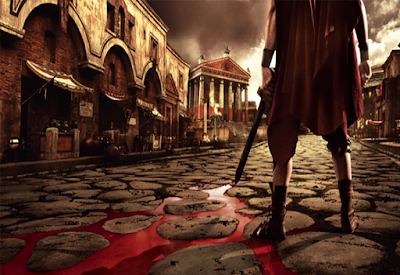 Rome (Season 1), (♦♦♦♦): Julius Gaius Caesar is co-Consul of Rome, together with his good friend Gnaeus Pompey, but conquering Gaul has kept him busy and away for the last eight years. Pompey has presided over the Senate in Caesar’s absence. But winds of Caesar coming back, throwing trinkets to the masses to win favors, are circling in Rome. The Senate wants to rule on Caesar’s disarmament, but in a bold move, Caesar appoints Mark Antony as a Tribune, with powers to exercise veto in the Senate. When the vote on Caesar’s disarmament is to be carried out, Mark Antony is prevented, by the eruption of hostilities, from vetoing the ruling, thus Caesar becomes outlaw and in defiance of the Republic.
Caesar comes back fully armed and most of the Senate flee Rome to gather enough legionaries to expel Caesar, but as that doesn’t happen, Brutus, Cicero and other Senators come back and lend legitimacy to Caesar’s cause, who becomes Imperator of the Roman Empire for life, with absolute power. The Republic is dead and the Senate has been rendered powerless. 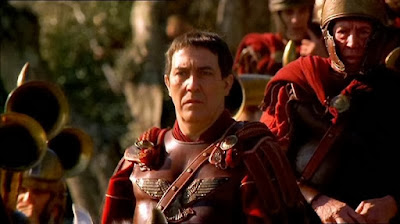 I started watching the first episode of Season 1 of Rome, a co-production between HBO and BBC—filmed at Cinecitá studios in Rome—a few months ago, and got quickly bored, but recently I finished watching both seasons of The Hollow Crown (HC-I and HC-II), Shakespeare’s historical plays on the War of the Roses, and blogger friend Dorothy asked me whether I had watched Rome, which is an adaptation of Shakespeare’s play Julius Caesar. I had not, but I decided to watch it as soon as I was able since I enjoyed those other adaptations so much, and I really liked it.
There is an impressive world-building to this series: the sets, the speech, the characters’ demeanors, and the costume designs. The direction, the script, and the performances, of leading and secondary actors, are commendable too.
I found that I was attracted to some characters and their story arcs more than others, like Mark Antony and legionaries Titus Pullo and Lucius Vorenus. I totally disliked Brutus, not so much for the role he played in Caesar’s death, but because Tobias Menzies, the actor who played him, always stars as a villain in everything I have seen him in (e.g. Outlander, The Night Manager), and I have started to associate him with the characters he plays so well.
Worth noticing was Ciarán Hinds playing Gaius Julius Caesar. I can’t think of any better choice to play him, or an actor with more gravitàs to embody him. Unfortunately, and this is probably a problem from the script, I didn’t think that Caesar was portrayed as sufficiently dangerous to the Republic to warrant an assassination. I only know, from my study of Western History in college, how Caesar’s regicide was carried out, but not what circumstances led to it, and I don’t think Season 1 of Rome cast sufficient light into that. Fortunately, I’m reading the translation by Robert Graves of Gaius Suetonius Tranquillus’ The Twelve Caesars, based on ancient historical sources and contemporary accounts, which gives more in-depth information on the life of Julius Caesar and the events leading to his assassination.
I liked this season well enough to move on to Season 2.
In Music... 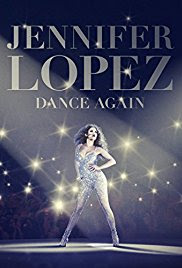 Jennifer Lopez: Dance Again (♦♦♦♦): this special for HBO, part documentary, part musical, chronicles the triumphs and challenges of Jennifer Lopez's first world tour ever, titled "Dance Again", which coincided with the announcement of the dissolution of her seven-year marriage to singer Marc Anthony. The tour sold one million tickets, and had stops in several American cities (Chicago, Miami), Latin America, Europe (Lisbon, Madrid, Paris, Copenhagen, Moscow, and Saint Petersburg), Asia (Kuala Lumpur), Australia (Perth), and it ended in Puerto Rico, where her ethnic roots lie, and where she gave her very first concert at the start of her singing career.
Along the stops, we get to experience the tour through JLo's eyes, as much as through the perspectives of family members who accompanied her. We also get front seats to several catchy, danceable numbers interpreted on tour, such as the hits On the Floor, Waiting for Tonight, Dance Again, Jenny from the Block, and Love Don't Cost A Thing, among others. Of relevance is a guest appearance by Marc Anthony in Puerto Rico, where they sang the hit No Me Ames, a collaboration they recorded back when fame was a relatively new thing to her.
Overall, Jennifer Lopez: Dance Again is a very entertaining experience that runs for approximately 1:25 hours.
The movies… 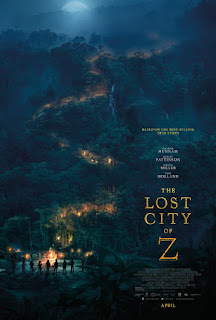 The Lost City of Z (♦♦♦): British Major Percy Fawcett is commissioned by the Royal Geographical Society in 1906 to survey the Rio Verde (Green River) that is a source of contention between Bolivia and Brazil for the rubber extant in the area. A war may be prevented if the survey is successful. Percy enlists the help of an aide-de-camp named Henry Costi. Together, they reach the place where the river is born, somewhere no other white man has reached before.
His second expedition in 1911, with the objective of finding a lost city in the jungle, which he nicknamed "Z", fails due to the loss of provisions. His third trip, second and final attempt to reach the "lost city of Z", was made in 1925 accompanied by his elder son, Jack. It is believed they reached their destination, but never made it back.
Being surrounded by dense vegetation and animal calls give the audience a full immersion in the challenges Percy faced in his expeditions, and lend an elemental quality to the film, contrasting with the scenes from early 20th century England. There is not a lull in the action, though the film is not necessarily action driven; it is more of an artistic meditation on the life and sacrifices that a great explorer made for fame and glory. In that sense, The Lost City of Z is very satisfying.
2017 movies movie reviews musical concerts snapshots TV shows