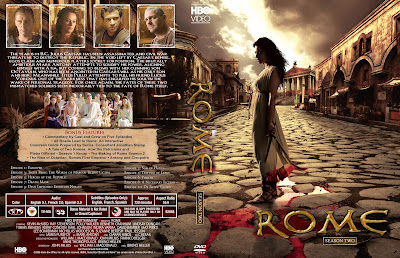 Rome (Season 2), (♦♦♦♦): Julius Caesar is dead. In his will, he named Octavian his son and sole heir. Mark Antony assumes control of Rome as Consul and reaches an amnesty with Caesar’s assassins, but still harbors resentment towards them and awaits the opportunity to exact revenge.
Senators Marcus Brutus and Cassius leave Rome until the ebullient mood after the regicide subside, but knowing that Octavian has claimed his inheritance and raised legions to fight Caesar's enemies, they do the same. The result is civil war. Mark Antony doesn't recognize Octavian's claim either, but together with Marcus Lepidus, the three of them form a triumvirate to rule the empire. They defeat Brutus and Cassius and split the responsibility of ruling, with Mark Antony assuming control of Alexandria and Egypt, which happen to be the most fertile region of the empire.
As Mark Antony withholds the shipments of grain so vital for the sustenance of the Roman people, a new civil war ensues, one which, if won by Octavian, will cement his status as the sole Imperator.
Season 2 of Rome happened to be the final one, and it is a shame because the reigns of the Caesars were among the most brutal and colorful in Roman history, enough for several seasons of endless drama. As was true for Season 1, Season 2 was full of action, battles and political maneuvers. It also kept intact the impressive world building, great costume designs, good acting, and authenticity that made this series a must-see. 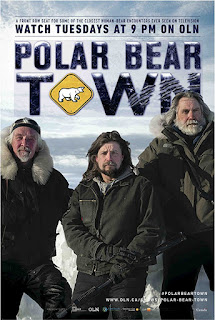 Polar Bear Town (♦♦♦♦): Every Fall in the Canadian town of Churchill, Manitoba, converge 800 townsfolks, 10,000 tourists, and 1,000 polar bears, because this town, on the direct path polar bears take on their way to the frozen Hudson Bay to hunt seals before their winter hibernation, is the polar bear capital of the world.
Polar Bear Town, a miniseries of six episodes from the Smithsonian Channel, portrays how polar bear season impacts the town of Churchill, Manitoba and its residents, for tourists from all over the world visit the town every Fall for the opportunity of viewing, chronicling, and photographing polar bears up close. We get to shadow bear guides, newcomers and experienced ones, as they steer tourists towards the best spots available to encounter bears, and a man who has shouldered the responsibility of keeping the breed of skimo dogs alive. On Mile 5, a man named Brian Ladoon, feeds his skimo dogs while polar bears come to investigate attracted by the blocks of frozen food. If the bears behave well, they know there are plenty of scraps of meat available after the dogs finish eating. The availability of polar bears on Mile 5, gives Ladoon the chance to raise money off tourists during bear season to feed his dogs every two days during the winter months.
But all is not wine and roses in Churchill. In 2015, a polar bear attacked a young woman in the early hours of the morning, as she was making her way home from a Halloween party. She survived the attack, but ever since, conservation officers who have the job to protect both bears and people during bear season, are closing popular viewing spots and enforcing more distance between both species, which is inconvenient for bear guides whose incomes derive from bringing tourists and bears together.
Polar Bear Town showcases beautiful photography and amazing stories from people that otherwise would not be known. Excellent viewing experience and highly recommended.
The movies… 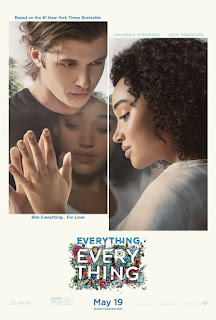 Everything, Everything (♦♦♦♦): Maddy is an eighteen year-old who has never left her house because she has an uncommon type of immunodeficiency disease; common infections may endanger her life. She lives with her doctor mother, and is supervised by a nurse that together with her daughter are the only people Maddy has ever been in contact with.
Maddy is funny, smart, and curious. She is a member of a support group made of people with her disease. She also reviews books and is taking an architecture class online for which she builds models. That carefully constructed world tips over when Maddy meets Olly, a handsome, recently moved neighbor, who feeds her desire to see and experience outside life.
Everything, Everything is a classy movie about self-discovery, love and the lengths we go for it. It is adorable without being sugary, with the inevitable teenage rebellion without the angst. Both Amandla Stenberg (Maddy) and Nick Robinson (Olly) are believable in their roles, good looking, and have great on-screen chemistry. On top of all that is an awesome musical score, and great editing since the movie makes its case well in 96 minutes. 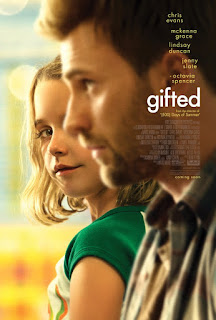 Gifted (♦♦♦♦): Frank Adler (Chris Evans) has had custody of his six-year-old niece, Mary (Mckenna Grace), since she was a baby and her mother, a tormented mathematics genius, committed suicide. Mary is gifted, but Frank, who has been home-schooling her, wants her to make friends her age, and play like a normal child would. When Frank sends Mary to regular first-grade, it soon becomes obvious to her teacher that Mary is different. Once Frank antagonizes the principal, he is put on a collision course with his mother Evelyn (Lindsay Duncan), who has financial means, and a desire to engage Mary's mind with tutors and what not; the result is a court case in which both parties could lose.
Gifted is one of the movie surprises of this year. It has been pleasant to see Chris Evans in a more dramatically demanding role than that of a superhero and he delivers in spades. Gifted is well acted by the whole ensemble, which is small, but especially by Chris Evans as Frank and Mckenna Grace as Mary. Their on-screen chemistry is off the charts, like a yin-yang relationship. The film keeps the humor light to punctuate the more underhanded scenes having to do with the grandmother trying to split apart Frank and Mary's adorable duo, the court battle, and its heartbreaking outcome.
Gifted is very entertaining and food for thought; its running time of 101 minutes will be one of the best times you’ll spend watching movies this year.
2017 movies movie reviews snapshots TV shows