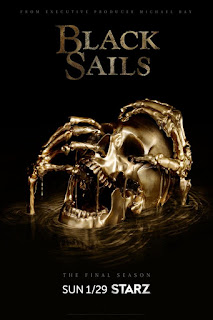 Black Sails (Season 4), (♦♦♦½): After Charles Vane was executed at the end of Season 3, the slave community of New Providence Island has allied with the maroons and the pirates in a powerful onslaught of assaults against Governor Woodes Rogers' interests. Billy Bones has led the insurrection on the island on behalf of Long John Silver. War against the British Empire is inevitable now.
The Governor and his Lieutenant General, Captain Berringer, have unleashed terror against those they perceive as enemies of the British. The pirate faction has gained momentum, but Governor Rogers cannot give up the fight, for in marrying Eleanor Guthrie he has upset his ex-wife whose family has petitioned Rogers' creditors to accelerate the timetable of repayment for the enormous debt he incurred in attempting to reform Nassau. 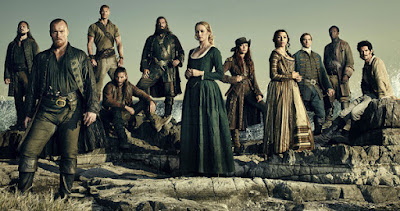 The pirates take hold of Nassau, and in desperation, Governor Rogers makes an alliance with a powerful enemy, one that will stop at nothing to see the pirate paradise burned to the ground, but in so doing, Rogers will lose the things that matter most to him. Will the pirates prevail, or will civilization?
Season 4, the final season of Black Sails, the Starz pirate show produced in part by Michael Bay, is bigger in scope than any of its predecessors. War is finally on the horizon, and with it, lots of battles, gore, and sword fighting. There is also a lot of political maneuvering to glue the coalition of freedmen, maroons, and pirates together, as well as to put a stable and viable government in place if they ever triumph.
Despite being more ambitious in scope than previous seasons, I didn't like the ending; it was too campy, too easy a resolution for a show that has shown so much guts from the beginning. That said, I'm glad that I stuck with it until the end. 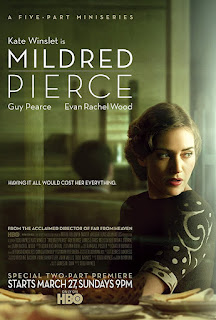 Mildred Pierce (♦♦♦♦): Mildred (Kate Winslet) and Bert Pierce are married and have two daughters in 1930, America. Bert has a mistress on the side, and when Mildred confronts him, he leaves her for his mistress. Now, Mildred will have to be more resourceful to put food on the table because the country is amid the Great Depression. Reluctantly, she finds a job as a waitress, and soon enough secures a contract with her boss to bake homemade pies and sell them at the restaurant. With Mildred’s pies being a hit, she eventually decides to open a restaurant of her own. As years pass, she opens two more restaurants and a bakery while she faces personal tragedies, sees her daughter Veda (Evan Rachel Wood) become a famous coloratura soprano, and her love life comes full circle.
Mildred Pierce, an HBO/Metro Goldwyn Mayer co-production, is a miniseries about a resourceful housewife in 1930s America. It is a story of entrepreneurship and financial triumph, the trials a family—as a group and each individual—goes through, the ups and downs of love, great betrayal by loved ones, and happiness at the end of it all.
I have to praise the whole ensemble cast for making this production enthralling, though no doubt it helped that the screenplay was very good as was the direction. Kate Winslet was outstanding in the leading role, as were Guy Pierce (as Monty Beragon, Mildred’s ill-fated paramour) and Evan Rachel Wood as Veda Pierce. The latter two received awards for their supporting performances.
The movies... 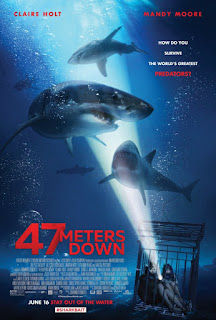 47 Meters Down (♦♦♦♦½): Sisters Lisa (Mandy Moore) and Kate (Claire Holt) are vacationing in Mexico. Two guys they are seeing offer to take them on a diving expedition to see great white sharks. Kate is a certified diver, but Lisa gets the basics while putting on her oxygen tank. The guys go first, after the boat assistant spikes the water with fish blood and scraps to attract sharks. Sure enough they come. The guys finish their turn in the cage all excited, and just before the gals' turn, the water is spiked again.
When the cage descends, both Lisa and Kate are ecstatic. Everything looks so clear, so magnificent! And then, the cage rattles, the winch holding it breaks along with the cable, and they end up at the bottom of the ocean, 47 meters down, where they have to contend with running out of oxygen, loss of radio contact with the boat, the bends if they come up too fast, and hungry great white sharks.
Goodness me! This movie is the stuff of nightmares, and it is better done than most films with similar topic. Both Moore and Holt are gutsy heroines who don't sit still to see death come knocking. Their fight for survival, their vulnerabilities, and the horror of their situation are so palpable, so right then and there, that one feels as desperate as they do, and just as impotent.
There's not much of a script, at least not one that can be evaluated in the conventional sense, but the darkness, the occasional shark, the tense musical score, the infrequent crackle of the radio, and both Holt and Moore, particularly the latter, make this film work as the horror it is supposed to instill.
Great watch with lights off and no interruptions! 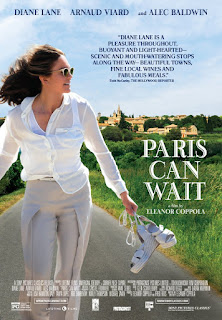 Paris Can Wait (♦♦♦): Anne (Diane Lane) has been married to film producer Michael (Alex Baldwin) for twenty years. They are on a combined vacation/business trip in Cannes. About to board a plane with her husband bound for Budapest, Anne decides to forfeit the plane trip and meet Michael in Paris on his way back. Jacques (Arnaud Viard), a Frenchman friend producer, offers to drive Anne to Paris. A seven hours-long trip takes them two days, while Jacques takes detour after detour to treasure panoramic views, detailed photographs, and savor French cuisine, good wines, and sensuous chocolate.
Paris Can Wait is a quirky movie about the best that France, and life by extension, can offer. There are gorgeous photographs of French dishes and vistas they encounter along the way. If you have never felt the impulse to pack your bags and embark on a journey through France, this film will give you a serious case of wanderlust, but don't count on it staying on your mind for long, because it is a light, borderline forgettable kind of movie. You'll have a good time though, while you roll your eyes at Jacques' deliberate attempts to seduce this married woman.
2017 movies movie reviews snapshots TV shows