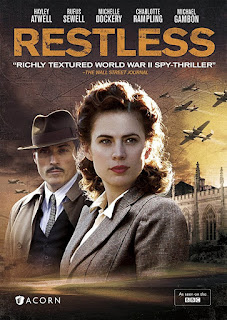 Restless (♦♦♦): Ruth Gilmartin (Michelle Dockery) goes with her son to visit her mother Sally (Charlotte Rampling) in the country, and finds her in a distressed state, as someone appears to be stalking her. Sally gives Ruth, in bits and pieces, her story as a British secret agent during the Second World War.
Sally's real name is Eva Delectorskaya (Hayley Atwell), a Russian immigrant with flawless English diction, whose brother was killed by a fascist group he was trying to infiltrate. As Eva Dalton, Delectorskaya was trained in spy craft, and flew to America with a unit to exercise the trade. At first, they work as a news agency planting war stories to be picked up by major newspapers, but then a big assignment comes for Eva; one in which she may be either the fall guy or a dead one.
This BBC adaptation of William Boyd's spy novel left me confused at first, due to the several name changes and a cast change, which I thought very unwise, for the younger characters.
Polished cinematic productions the world over, pay special attention to the likeness of characters who are related; that didn't happen here at all. Curvy, dark-eyed Hayley Atwell interpreted Rampling's character in her youth, with the minor oversight that Charlotte Rampling has green eyes and a ramrod thin physique. The same happened for the leading male: handsome Rufus Sewell played a middle-aged Lucas Romer (Eva's handler and boss), while Michael Gambon played the thirty-years-older character. Have they ever heard of makeup and aging effects?
It is a pity that Restless suffered from those technical gaffes, because I found the slow-burning intrigue completely absorbing if somewhat convoluted.
The movies... 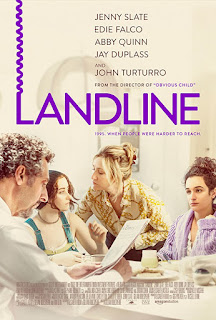 Landline (♦♦♦♦): When Ali (Abby Quinn) tells her sister Dana (Jenny Slate) that she suspects their dad (John Turturro) is having an affair, they both agree to spy on him without telling anything to their mom (Edie Falco). But how can they be truly objective when they are hiding secrets of their own?
I started watching Landline with no expectation that I was going to like it and was pleasantly surprised to discover that is very funny in an understated way. This is the second movie that I watch with Jenny Slate in it—the previous one being Gifted—, and I'm happy to say that she is quickly becoming my favorite funny lady.
Watch it without preconceptions and you may well have a good time. 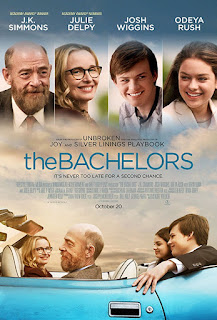 The Bachelors (♦♦♦♦): Widower Bill Palet (J.K. Simmons) hasn't overcome his wife's death since it happened a year ago. She was a very special person, reason why Bill can't find how to fill her void. In an impromptu decision, Bill uproots his teenage son, Wes (Josh Wiggins), from the familiar surroundings, and both move cross country to a small community outside San Francisco.
While Wes adapts to his new all-boys private school, getting the chance to befriend two outsiders and the most elusive girl (Odeya Rush) he has ever encountered, Bill is befriended by a youngish French teacher (Julie Delpy) who pushes him emotionally to express his grief in physical ways. Their journeys to healing is what this movie is about.
The Bachelors is an understated drama with powerful performances about living with grief and what it takes to mend the heart. All four leads are perfect in their roles, especially J.K. Simmons, whose typical roles—and he rocks them, by the way— are usually guys with sullen attitudes.
2017 movies movies reviews snapshots TV shows