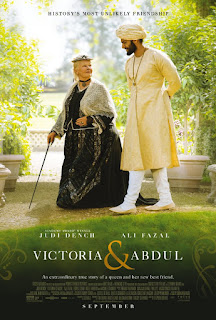 Victoria and Abdul (♦♦♦♦½): At 81 years of age, Queen Victoria (Judi Dench) is mostly overwhelmed by her royal duties. Her children are jockeying for the throne and her household staff for suitable positions. She feels trapped and increasingly isolated from her companions, but she gets a new lease on life when she meets Abdul Karim (Ali Fazal), a handsome Hindu Muslim, an envoy brought from India to present her with a coin during the celebration dinner of her Golden Jubilee. As the queen and Abdul's friendship deepens, it raises eyebrows, sends tongues wagging, and soon her entire household is up in arms over his hold on her affections and his growing influence in the household.
Among so many lackluster cinematic productions this year, Victoria and Abdul is a breath of fresh air. It is wonderfully funny and delightfully entertaining. It highlights class differences in British society without offensive snobbery.
Victoria and Abdul is an artful film that can boast of wonderful, empathetic performances—particularly Fazal's and even more so Judi Dench's—, greatly defined characters that are far from caricatures, a meaty screenplay that gives the actors room to explore their characters' psyche, outstanding cinematography, direction (Stephen Frears), great locales, and sumptuous costume designs. I will be very surprised if Judi Dench does not get a Best Actress Oscar nomination for this role, and well deserved it is. 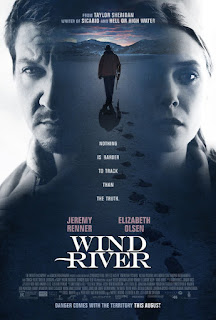 Wind River (♦♦♦½): A teenager runs barefoot in the snow through a desolate landscape at  -20 °F at night, after having been assaulted physically and sexually. She falls, exhausted, inhaling the frigid air and her lungs burst, drowning her in her own blood. Her name is Natalie Henson, and her body is found the next morning by Wildlife Management agent Corey Lambert (Jeremy Renner) who is tracking a mountain lion that is killing livestock in the Wild River Indian Reservation in Wyoming.
Rookie FBI agent Jane Banner (Elizabeth Olsen) is the closest agent in the field, traveling from Las Vegas. She will only be assigned an investigation team if the death is deemed a murder, which technically isn't, so she is stuck with tribal police (a skeleton crew of six policemen), and Corey, whom Jane asks for help to track and apprehend the perpetrators.
Wind River is a slow burning police investigation in a stark winter landscape that is as gritty as they come. Corey says in the movie that in that land you don't get lucky; either you survive or you surrender. That’s exactly right, they face all kinds of challenges: subzero temperatures, hostile environment and people, snow storms threatening to erase the evidence...
The action is punctuated by a haunting, eerie musical score, and even more haunting voice over to Corey's methodical tracking of the unsavory characters that pop up in the investigation. Elizabeth Olsen is impressive as Jane, but it is really Renner's show and he is the star that burns the brightest in Wind River. I would be surprised if he is snubbed out of any nomination this award season. He surely deserves it.
Favorite quotes:


[Martin]: "So you're driving this Fed around so she don't get lost? Is that it?"

[Jane]: "Shouldn't we just maybe wait for some backup?" 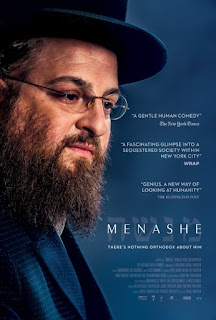 Menashe (♦♦♦): Menashe is a middle-aged Hasidic Jew who lives in the Hasidic community of Borough Park, Brooklyn. He lost his wife, Leah, a year ago, and has been grieving ever since, or rather, feeling incredibly guilty for not having gotten along with his wife, a product of an arranged marriage.
His young son Rieven is temporarily living with his uncle because the rabbi says that, according to their customs, Rieven must be raised in a household with two parents. Menashe's brother-in-law doesn't have any faith in him due, partly, to his late sister's unhappiness, and partly to Menashe's inability to make things work out in his favor. His job at a small Hasidic market is also a source of affliction; he is not paid well, and has constant friction with his boss.
On the approaching anniversary of Leah's death, a memorial is to be celebrated in her honor; friends will come, the rabbi will officiate, his brother-in-law is preparing to host. Menashe wants to prove that he has what it takes to raise his son—the rabbi has granted them a week living together—, and that he is able to organize the memorial successfully.
Filmed entirely in Yiddish, in secret within Brooklyn's Hasidic community, Menashe has a dry narrative that somehow works due to the universality of its topics: a father wanting the respect of his family, and the right to raise his son. It helps that one feels sorry for the protagonist, who seems to carry a dark cloud over his head fueled by grief and guilt.
Menashe is brimful with authenticity, small acts of defiance, and above all, respect for a conservative, religious way of life.
2017 movies movies reviews snapshots