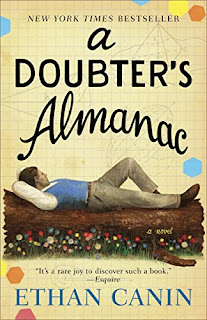 Milo Andret, only child of a rather unusual couple, grew up in the woods of northern Michigan in the 1950s. His parents’ lack of supervision gave him the freedom to roam the woods at length, and an unusual depth of mind and unique orientation skills developed in consequence. With the years, Milo developed an interest in mathematics and was admitted to UC Berkely as a graduate student. The Chairman recognized himself in Milo and steered him towards the research field that would him eventually earn him the Fields Medal.

Though not entirely popular, as a graduate student at Berkely and later as an assistant professor at Princeton, his savant mind garnered him praise, but in the California of the 1970s, Milo discovered the pleasures of the flesh and the dangerous allure of drugs and alcohol; the latter would become a demon that would derail his career and affect two more generations of his descendants.


I seem to have gravitated towards books on ‘people fighting their demons’ since the start of this year. This is unintended. I accepted The Largesse of the Sea Maiden: Stories by Denis Johnson without knowing what it was about and I ended up liking it a great deal; I’m happy to report that I liked A Doubter’s Almanac just as well. For the most part of this year, if not all, I intend to read some of this year’s book releases and catch up with some reading of ARCs provided to me by Netgalley in the past; this is the first post towards that goal.


I requested this novel because the protagonist was a mathematician, but the few concepts that the author explains through his characters are basically abstract mathematics, thus one does not need a science background to understand and appreciate this novel. A Doubter’s Almanac is not only a novel about the curse of genius in three generations of the same family, but it is also a heartbreaking—and at times hilarious—personal and family saga spanning fifty plus years, covering all along themes such as the fine divide between genius and madness, drug and alcohol abuse, a love triangle, spousal cheating, obsession, betrayal of trust, and how life’s achievements are and should be measured.


A Doubter’s Almanac may be about the lives of a few mathematicians, but it is written in a very lyrical prose. The novel is divided into two parts, with each chapter—further divided into bite size subchapters—titled as a method to develop a mathematical proof. I have to say that I was misguided by that, because I assumed it was going to be a novel about success, but it is actually quite the opposite. That said, reading A Doubter’s Almanac does not feel like a chore, perhaps because despite Milo’s many flaws, he is a fascinating character to read about, so much so that I loved more the first part in which he was practically the only driving force, and less the second part in which the author pulled off a 180° and changed the focus of the story.


I usually don’t attach a high rating to novels with flat-line storylines. I call that to those plots that don’t seem to go anywhere even though I enjoy them throughout. There are no highs or lows in those stories, and they become pointless after a while. I thought that this novel was going to be like that but it ended up being more fulfilling than I thought it would be after the author pulled that 180°. In other words, that switch most likely saved the novel from sameness.


Disclaimer: I received from the publisher a free e-galley of this book via Netgalley in exchange for my honest review.
2016 books books reviews Ethan Canin